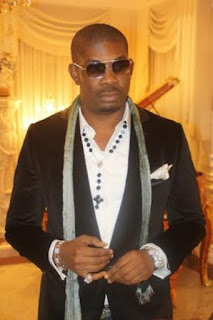 The video game contest gets underway at the forthcoming Tech+ Conference and Exhibitions holding in Lagos at the Eko Hotels and Suites today and tomorrow. And in what is deemed as the main attraction, the duo of Nigeria’s leading entertainment brands, Don Jazzy and Davido, will be among top Nigerian celebrities squaring up against one another.
The award-winning duo took to their Twitter accounts to announce their participation and, also, throw up challenges to any would-be contestants.
Davido, who on Sunday won the MTV AMA Best Male artist Award in South Africa, had tweeted several punches on his twitter handle @ iam_davido on July 16 to highlight his readiness for the competition.
“Think u can beat me @ FIFA 15? Come find out @ Tech+ from July 24th –25th at Eko Hotel! Register at bit.ly/MTNTechPlus #MTNTechPlus2015
“My FIFA 15 skills will be on point 4 Tech+! July 24th 25th at EkoHotel! Join me by registering at bit.ly/MTNTechPlus #MTNTechPlus2015
“Come play at d Tech+ tournament from July 24th-25th at Eko Hotel and win great prizes! Register at bit.ly/MTNTechPlus #MTNTechPlus2015”
Don Jazzy, on his own part, appears set to give the ‘Gobe’ crooner a run for the prized money.
Writing on his twitter handle @DONJAZZY  Jul 16, he tweeted: Think u can beat me @ FIFA 15?Come find out @ Tech+ from July 24th-25th at Eko Hotel.’
With the battle line seemingly drawn and the ground shifted from the music arena to TECH+, it remains to be seen who between these two or among other celebrities will come tops
Meanwhile, category winners and runners-up in the 2015 FIFA 2015 and Mortal Combat Games at the Tech+ Conference and Exhibitions will be going home with a total cash reward of N1.5m.
Mr. Tunji Adeyinka, whose company, Connect Marketing Services Limited, is organizing the TECH+ Conferencedisclosed this recently while speaking at a forum ahead of the epoch-making conference which is the first-ever in the country.