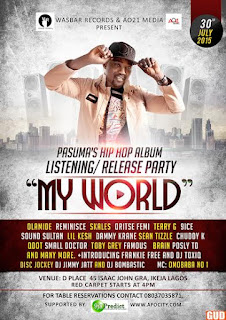 Fuji star, Pasuma Wonder (odetola Wasiu Alabi)is set to release his highly anticipated hip hop album, titled MY WORLD. The 15 track album is scheduled to hit the shelves on Thursday July 30th 2015. According to the Kwara born singer, the album features several hip hop acts includingOlamide, Tiwa Savage, Phyno, Oritsefemi, Terry G and Pato Ranking. Pasuma dropped the first single "ABO" off his debut hip hop album inNovember 2014 and this was followed by a love song "IFE" featuring Tiwa Savage. ABO and Ifewithout doubt enjoyed massive airplay onradio/TV stations across the nation. Following the success of Abo and Ife, Pasuma dazzled everyone with a rap song titled Ogede Ti pon. The video of his latest single "Oruka" (a wedding themed song) which featured about 30 Nollywood stars has been rated as one of the best video of 2015.


Speaking on his hip hop album , Pasuma says " this is like a dream come true and I am excited about it.  I first thought about this project about five years ago. My manager Afolabi Oyekoya who happens to be the CEO of AO21 Media initiated the idea but we didn't take it serious until late last year.  Right now we have recorded about 19 songs but we will be releasing 15"  The orobokibocrooner was asked if diversifying into hip hop will affect his career as a Fuji artiste and he responded that " I don't want anyone to get it wrong, I am a fuji artiste and will always be a fuji artiste. I am just having fun and enjoying what I am doing right now. If I am right I will be the first person to have shown such dexterity and versatile ability, jumping from one genre of music to another. It has not been easy but It has been fun.

Sent from my BlackBerry 10 smartphone.
Posted by Unknown at 11:46 AM