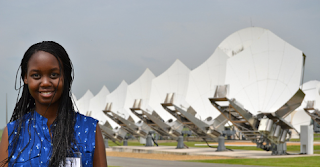 Due to popular demand, MultiChoice and Eutelsat are pleased to announce that entries for the DStv Eutelsat Star Awards have been extended until Friday, 20 November 2015.
We are calling all learners between the ages of 14 - 19 to write an essay or design a poster on how satellites have helped us to understand and take care of our planet.
The DStv Eutelsat Awards are open to all students from secondary (high) or combined schools in Africa where MultiChoice Africa maintains operations. Entry forms can be obtained from any MultiChoice Resource Centre, the nearest MultiChoice office or copies can be downloaded from www.dstvstarawards.com. Entries can be submitted in English, French and Portuguese. The awards collateral is also available in three languages (English, French and Portuguese). Only entries submitted on the prescribed entry form will be eligible.
Participants not only stand a chance to win great prizes within their respective countries but overall winners will be rewarded with a trip of a lifetime; the overall winning essay – a trip with his/her parent/legal guardian to Eutelsat in Paris, France and onwards to a spaceport to attend a live rocket launch.
The overall winning poster will be offered a trip with his or her parent to Eutelsat in Paris and a satellite construction site. The runner-up poster and essay entries will earn a trip with their parent/legal guardian to visit MultiChoice in Johannesburg and the South African National Space Agency at Hartebeesthoek.
The winners will be announced at a glittering awards ceremony in Uganda during February 2016.