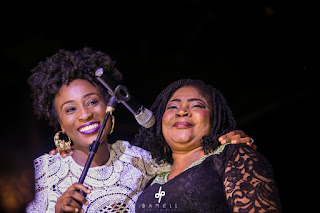 Renowned artistes who rocked our airwaves in the 90s and early 2000s and headliners for GOAT 2015 gave an epic performance and unforgettable evening at the first ever Greatest of All Times Concert.

The event that held last weekend, Saturday, November 14, 2015 at the Shell Hall, Muson Centre in Lagos had music lovers and fans come out in their numbers to experience the much-anticipated show.


Put together by OSD entertainment to celebrate Nigeria’s true and living legends that have made tremendous impacts on the urban music culture, the concert was hosted by Comedian- Gbenga Adeyinka.

It was a nostalgic experience, as the stars couldn’t get enough of the love from the fans. Tony Tetuila gave a shout out “Thank you all for the love Lagos and singing along “ before performing the monster hit “My Car”

The show reached its high point when Jimmy Jatt took to the turntable and took fans through hits from the 2000s. History was made as Aramide was joined on stage by living legend Salawa Abeni. The two harmonized to Salawa Abeni’s free style on Aramide’s Iwo Nikan. Of course this spurred a hullabaloo of applause from fans and other celebrities present.