The Future Awards Africa nominees were hosted to an exclusive nominees reception by the United States Consul-General, John Bray, at his residence in Lagos, on Tuesday, November 24, 2015.

He recognized the strides achieved by The Future Awards Africa over the past ten years and commended the inspiring contribution of young Africans who are making a difference in their communities and globally.

“I am delighted that my first act in Nigeria is recognizing young people who are doing amazing work, these young leaders of The Future Awards Africa are the best of the best not only in Africa but in the world.” Bray said.

“In my view, the future of Africa is its youth. In putting together The Future Award Africa (TFAA), Adebola and Chude have done extraordinary work in the past decade celebrating young Africans from not just Nigeria but across Africa. This year, the theme of The Future Awards Africa is #AfricaNeedsYou which will see the platform visit 100 cities across the continent spotlighting the issues and showing how people can help. Africa shouldn't just rise in theory but practically by each and every one of us lending a hand to one another.” Bray concluded.

Adebola Williams, co-founder of The Future Project spoke about the nomination process and also commended the nominees on their innovative contributions to the growth of Africa in a heartfelt speech at the event.

“For us, the real award is those people whose lives have been changed through The Future Awards Africa,” said Adebola Williams. "That is why it is important that we go to the furthest to find amazing stories through national and continental media platforms, social media, credible organisations, professional associations and more we seek out these brilliant Africans. Followed by a rigorous four chain judging process. Everyone nominated and here tonight is an outstanding young person across the continent,” he continued.

This year's campaign is geared towards tackling issues facing the youth via a 100 cities tour across the continent to create #TFAAHubs which would serve as centres for community support.

The winners of the 10th edition of the TFAA would be announced at a grand event on December 6, 2015 in Lagos, Nigeria. 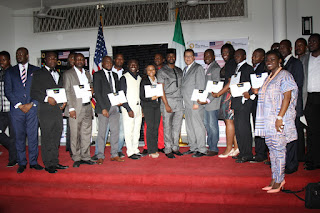 in Lagos
Posted by Unknown at 9:28 AM