Sprite Triple Slam took over the sidelines of the Faceoff Celebrity Basketball event, organized by Playcentre Nigeria which held at the Landmark Events Centre, Lagos recently.

While celebrities turned up the court inside the Hall, Sprite was the headline celebrity off the court as it engaged attendees with its popular Sprite Triple Slam activation. The engagement saw consumers showing off their skills in basketball, rap and dance moves before the main event officially kicked off. Dance moves from the Sprite cheerleaders was indeed a nice side attraction as event attendees sipped on ice-cold bottles of Sprite.

Speaking about the event, singer-song writer and recording artiste, Sound Sultan, who had participated  in the first edition of the a Sprite Triple Slam event in 1998 said that, “Through Sprite Triple Slam, Sprite is effectively propping up the local Basketball League by providing a platform for the discovery of new talents. I am passionate about the game and it is gratifying to know that it is receiving the support of The Coca-Cola Company.”

Upcoming Rapper, Zlatan Ibile, who entertained the audience with his freestyle rap disclosed that ‘’For many young Nigerians, Sprite Triple Slam is not just a fun event; it has helped many talented teens and young adults improve their Basketball, Dance and Rap skills. I am sure in the long run, this will contribute positively to the country’s performance in competitive Basketball while enriching the talent-base of the rapidly growing music industry.”

Commenting on the night’s Sprite Triple Slam performances and Sprite sponsorship of the Faceoff Celebrity Basketball event, Senior Brand Manager, Flavours, Coca-Cola Nigeria Limited, Toyin Nnodi, said that Sprite is committed to enabling its consumers bring to life their true passions and ability for self-expression. Hip-hop has been a key element of the Sprite essence for many decades and through our Sprite Triple Slam platform, the brand actively sparks up the creativity inherent in young people”.

This year, Sprite Triple Slam toured a total of seven Nigerian universities, providing excited campus students in Benin, Ibadan, Calabar, Enugu, Owerri,  Port-Harcourt, and Lagos, the opportunity to engage with the brand though its unique 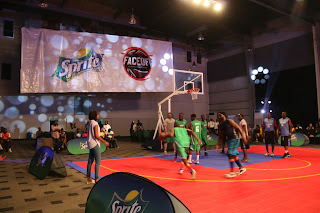