Stella Damasus and Daniel Ademinokan are at it again 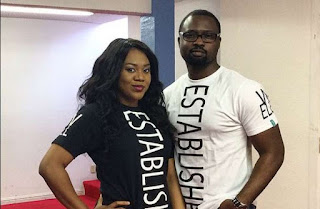 The pair of Nollywood actress Stella Damasus and movie director have set another business together after launching a fashion label about a year ago.
The lovers who have separately had previous controversial experiences with marriage (Stella with Emeka Nzeribe and Daniel with Doris Simeone) relocated to the US with their kids and got married secretly have both joined forces to launch the test transmission phase of their online television station, ‘Mon Afrik TV.’
Mon Afrik TV has been described as a blend of BET, MTV, E-ONLINE, NBC and CW Network all rolled into one but with 100% African content. “That is what we have created and we want Africans all over the world to see this as their own medium of expression, not just another TV station,” Stella hinted.
Also speaking on the new initiative, Ademinokan explained that Mon Afrik TV is set to fill a big vacuum and also serve as respite for less content providers who can’t afford the fee of other television stations.
“We see no reason why a struggling producer who could barely afford to raise the capital to make his/her TV show should also look for money to pay the TV stations for airtime before the world can see his/her content. After that, they have to convince brands to place adverts on the show before he/she can start making any money. That is extremely discouraging for independent producers." He added.
Posted by Unknown at 12:02 PM