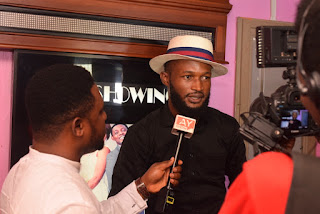 The much anticipated movie, FUSION which debuted on Friday, April 15 across cinemas in Nigeria selling out halls across Cinemas from Lagos, Port Harcourt, Warri, Abuja to Kano. The movie which was released simultaneously across cinemas in Nigeria on Friday is being distributed by Silverbird Distribution West Africa and features some of Nollywood's finest actors including AY, IRETI DOYLE, VICTOR OLAITAN, YVONNE JEGEDE, BEVERLY NAYA, PEGGY OVIRE, SEUN AKINDELE, BUCCI FRANKLIN AND NAIJA FM OAP-ONOGE TEGA BEN.
Feedback of multiple chuckles and sometimes uncontrolled bursts of laughter has confirmed a movie as a hit with cinemas guests across Nigeria. During post screening interaction with the guests, many of them declared that the movie was relatable to current experiences which young couples face in their homes. They gave the movie a thumbs up for taking these scenarios and recreating them with a healthy dose of humour.
Speaking on the reactions from those who had seen the movie, the Producer-Darlington Abuda said Fusion was conceptualized to show couples everywhere, especially young couples that the challenges faced in their marriages can be handled with levity. The movie seeks to provide a positive analysis of newlyweds from a comedic vantage point. "I am very happy that people are in love with the movie. We set out to do something that will celebrate marital unions while simultaneously entertaining them and from the reactions around me, I am pleased to say we have achieved that."
Mr. Abuda went on to say that in appreciation of the support gotten from fans over the weekend, Peekaboo Productions will this weekend kick of a raffle draw that will see guests who see the movie win fabulous prizes including weekend getaways and dinners with movie cast.
The steamy romantic comedy which was produced by Darlington Abuda is written by awarding winning writer of the Box-office Breaking '30 Days in Atlanta', Patrick 'Koinage' Nnamani and directed by award winning director, Niyi Towolawi.
REACTIONS TO MOVIE
Visit www.fusionthemovie.com for more details.
Sent from my BlackBerry 10 smartphone.
Posted by Unknown at 1:23 PM