(Video) Base One ft Kayswitch "At It Again" 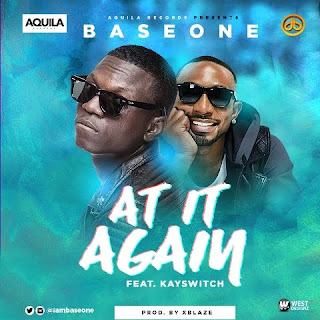 AQUILA RECORDS' lyrical machine-gun, BASE ONE released his newest single AT IT AGAIN featuring KAYSWITCH on his birthday a few weeks ago. The song has been met with rave reviews since its release, and it has also been enjoying good airplay both on radio and in the clubs.
A section of BASE ONE's fans however have been asking for a "Lyrics Video", so he decided to give us just that.
Base One ft. Kayswitch - At It Again (official lyrics video) https://youtu.be/mGWBmtJxqA8
Base One ft. Kayswitch - At It Again (audio download link) http://bit.ly/BaseOne_Kayswitch_AtItAgain
The lyrics video is a funky one, and will definitely endear fans to the song even more.
Posted by Unknown at 10:48 AM