Rave of the moment musical reality singing competition, Lip Sync Battle Africa was specially launched with a thrilling performance by select journalists and staff of MultiChoice Nigeria. The event took place last week Friday at the MultiChoice Head office in Lagos ahead of its 30 April premiere launch on MTV Base (DStv channel 322). 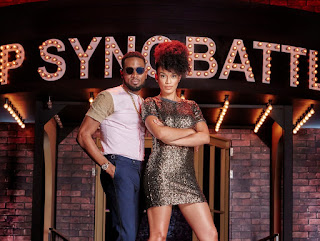 Hosted by the dynamic duo of Nollywood actor, OC Ukeje and MTV Base VJ, Ehiz, Thank God Its Friday (TGIF) took a new meaning at the exclusive launch in anticipation of the premier of the Lip Sync Battle Africa.
Speaking at the event, Managing Director, MultiChoice, John Ugbe, said: “At MultiChoice, we strive to add even more value to our customers as well as our partners, particularly the media, which is why this launch is targeted at giving them an avenue to experience firsthand the thrilling experience of the reality show”.
Highlight of the show was the media category where blogger, Tosin Ajibade of Olorisupergal and Entertainment journalist, Hazeez Balogun, went head-to-head. While Tosin dazzled the crowd with Lagbaja’s ‘Koko below’, Hazeez  impressed with a surprise rap number by 50 cent titled ‘Patiently waiting.’ Prizes were presented to both contestants for participating.
Lip Sync Battle Africa is hosted by South Africa’s actress and TV presenter, Pearl Thusi and D’Banj. Contestants have the opportunity to mime two songs each and the winner is presented with the winning championship belt as well as earns the bragging right of being Africa’s first lip sync battle champion.
In the first episode aired on Saturday, 30 April, Derenle and Ebuka went head-to-head to determine the celebrity Lip Sync Battle champion.
There is also an opportunity for viewers to be part of the fun and excitement. Viewers can be part of the Lip Sync Battle challenge by uploading their personal lip sync of D’banj’s “Emergency”, Davido’s “The Sound” and Yemi Alade’s “Johnny” on Instagram, Facebook and Twitter with the hashtag #LSBChallenge and stand a chance of winning 10,000USD.