In the words from the holy Qu’ran, 'if anybody in Islam is declared missing and not found after four-years, the family should organise a fidua prayer in remembrance of the missing person, either dead or still alive.'
It is exactly four years after the father of Nigerian Television Authority NTA's broadcaster, Alhaji Aremu Rasqak Gawat; was declared missing in controversial circumstances.

And in adhering to the dictates the Qu'ran, Alhaja Rukayat Gawat-Oyefeso has picked 10th of July 2016 to stage fidau prayer and big remembrance party for her missing dad.
The event takes place at Muri International Television ‘MITV’ premises Alausa Ikeja, Lagos, while Sheikh Muyideen Ajani Bello and Sheik Daud Abdul Majeed Eleha (Alfa Nla) will be the distinguished clerics of the day.
From the time, his sudden disappearance has remained a mystery to many, with so many unanswered questions, while series of special prayer sessions were organised for the missing ace broadcaster and former staff of NTA, Tejuosho, Yaba, Lagos. The circumstances that led to the sudden disappearance of Gawat, was described as 'mysterious' by many, but with optimism and prayers, the missing TV presenter could be found.
Meanwhile, the daughter Alhaja Rukayat Gawat-Oyefeso who is the current rave of the moment in Islamic music circuit, recently released a threefold album called ‘Ramadan Special’ which consists of ‘Alao Jowujowu’ featuring Suleiman Alao aka Malaika, Temitope and followed by a joint effort which features over 20 Islamic actors is titled ‘Ramadan Kareem.’
The easy-going singer made her name with the release of her first album and since then has performed at several big Islamic functions. Her musical albums include ‘Imole,’ ‘My Father’, ‘Arinakore,’ ‘Aye Le’, Iyawo Obun and ‘Agboko L’Ori,’ as well as ‘Ogbe-Okan’. 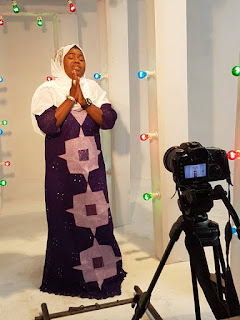