Oshiomole will be remembered for destroying education legacy -Ize-Iyamu 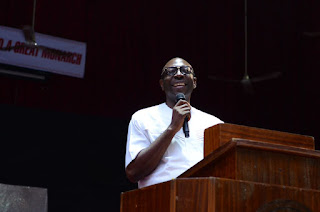 PDP governorship candidate, Pastor Osagie Ize-Iyamu on Tuesday lamented the state of Education in Edo state stating that the present administration of Governor Oshiomole has failed in the area of education.

Ize-Iyamu, delivering a lecture at the University of Benin, titled "State of Education in Edo: The Way Forward,” presented an historical narrative of the ‘’golden era of education” in the State and paid glowing tributes to the legacies of Dr. Samuel Osaigbovo Ogbemudia, late Professor Ambrose Ali, his father Chief Osayande Ize-Iyamu and others for their roles in developing education in the old Bendel State.

The PDP gubernatorial candidate however said that all of these have been laid waste by the Governor Adams Oshiomole administration which he said lacks a policy on education, but has focused “largely or exclusively on re-roofing some selected urban and sub-urban schools for political sloganeering and propaganda.”

Ize-Iyamu said issues such as lack of teachers, training and motivation as well as abandonment of rural schools have become an hallmark of the current administration. He said that most schools in the state lack teachers, he said;

"The governor’s political slogan of “one man one vote” appears to have affected schools in the rural areas, as it has become one school one teacher.

He said that Oshiomole’s educational legacy can be described as the "red roof revolution” and he added:

‘’The aluminum red roofs for these schools is not bad, but it is good to put the effort into a correct trajectory in the sense that it is State Universal Basic Education Board (SUBEB) money and a joint effort of the federal and the state governments where the former pays the lion share of the money”, he stated.

“The question is: is building or roofing the only component of educational development? How about adequate number of teachers, facilities, the environment, security, motivation to learn?”

Ize-Iyamu took the opportunity to woo the audience by giving insight into his approach to education if elected Governor in the September 10 elections.

"The programme on education under our stewardship will ensure that no Edo child is left behind. Edo State Government under our leadership will provide free and compulsory education from primary school up to the end of junior secondary school.

"The Edo State education programme will be driven by a determination to train Edo people to be skilled and competitive both nationally and globally through the adoption of the use of modern pedagogical methods including ICT and multi-media platforms.

"To this end, we will be biased towards science and technology, with particular emphasis on those courses that enable our youth to obtain technological skills that will enhance the development of the state.”

He said his administration would ensure that no Edo child is left behind. "We have a great opportunity to make our education work for the good of all. The Future Is Now, Take it,” Ize-Iyamu concluded.
Posted by Unknown at 10:52 AM