Wole Oni back with new single

He is back with another block buster Jazz song, the 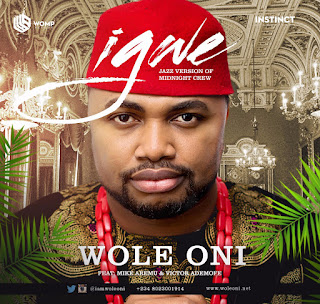 He comes with this breathtaking, heart-stirring, spine tingling Afro Cuban Known as Salsa music which has so many intriguing, alluring elements of transverse horns ensemble with diverse coloration and rhythmic procession of luxuriant percussions, heavy bottled syncopations yet easy to sing along and danceable vibes.

Haven produced so many great hit such as; Olomi by Tosin Martins, Kosobabire by Folake Umosen, Ijoba Orun, kolebaje and Others by Lara George, Woman’s Need and Afurumginaya by Praiz, African Woman and Mango Tree by Jodie, So More by Kenny Kore, Nigerian Centenary Theme Song All Stars by Onyeka Onwenu, Mo More by Kayode Olusoji, just to mention a few, Wole Oni, popularly known as (WOMP) is indefatigable making waves across the globe.

To show that God is the only Igwe (King), Wole Oni recorded an acoustic, fluffy, warm, silky yet fat and inspiring sound of heaven. Rattling on the piano with an astounding improvisation disseminating some plausible, incontrovertible chords while punctiliously interpreting the song in his own arrangement although the original version was released years back by the quadruple ever-blazing group Midnight Crew.

‘Igwe’ song exhibits another expression of a copacetic and exceptional talent out of Africa and speaks about the musical prowess and divinity of God’s awesomeness; with a blend of sweet and enthralling melodies.
Posted by Unknown at 10:33 AM