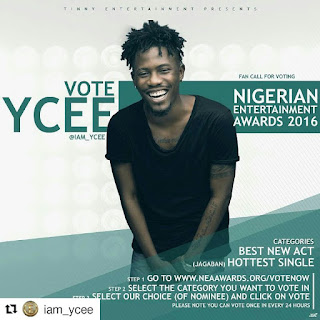 The NEA AWARDS is an annual entertainment award event held in the United States, with the sole purpose of celebrating and recognizing the numerous contributions of entertainers to the African entertainment industry, while at the same time promoting the image and rich culture of Nigeria.

In celebrating its 11th year anniversary, the Nigeria Entertainment Awards (NEA) has expanded its nomination categories and instituted new policy changes on how to distribute its trophies.

It's Just 1 step & A Click to vote YCEE for your 'Best New Act' and' Hottest Single' of the Year at the NEA awards.

Sent from my BlackBerry 10 smartphone.
Posted by Unknown at 8:54 AM