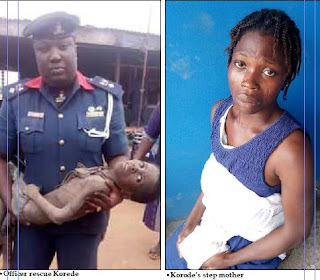 Respite has now come the way of a 9-year-old boy identified as Korede Taiwo whose legs and hands were reportedly tied with chains by his father who is also a pastor after he was reported to have allegedly stolen meat from his stepmother's pot.

Sources said it took the intervention of men of the Nigeria Security and Civil Defence Corps (NSCDC), Ogun State Command who stormed Ajibawo village in  Atan-Ota,  Ado-Odo Ota local government area of the state to rescue the helpless boy after a tip off.
According to Olanrewaju Kareem, the Public Relations Officer of the NSCDC the case of the boy was reported by a concerned citizen who provided information about the plight of the boy who had been chained for over a month.
Kareem said after the tip off, men of the Civil Defence Corps stormed the Celestial Church of Christ (Key of Joy Parish) where the boy was held captive and when he was rescued he was looking tired, pale and couldn't utter a word.
Recounting the scene when they arrived the church to rescue the boy, Kareem said; “ On getting to the church, there was serious resistance by members, led by the pastor’s wife, Kehinde, but men of  Civil Defence Corps   insisted, and  were able to force their way into the premises and found that   the   boy was actually in chains”, the PRO  added.
“They quickly took him to the office for necessary entries and documentation and proceeded to the General Hospital, Ota.
“The boy was bathed and one Dr. Akintunde at the hospital   asked   NSCDC officials who took him there to cut the chains to enable them administer treatment on him.
“Before our men  left the hospital, he had been responding to treatment as he had started talking. However, the Hospital Medical Director one Dr. Osinbajo who came later assured the Corps that the boy will get necessary medical attention.
“The stepmother and the chain with padlock have been handed over to the police and a manhunt is underway for the pastor who is on the run”. Kareem added.
When delivering the reaction of the the Assistant Inspector General of Police in charge of  Zone 2 Command, Lagos, AIG Abdulmajid Ali, the Ogun State Police Public Relations Officer, Muyiwa Adejobi, in a statement, said  the AIG strongly condemned the pastors action.
“He has ordered that the young boy, Korede,be given proper medical attention,” Adejobi said.