Clinton makes history, becomes 1st woman to be picked by major US party 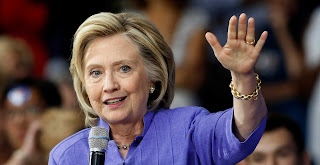 Ex-secretary of state and first lady, Hillary Clinton made history as the first woman to be selected by a major American party to contest for White House after she secured the 2,383 delegates needed to win with South Dakota's vote.
Her formal nomination by the Democratic Party is coming after days of tension between supporters loyal to Senator Bernie Sanders and pro-Clinton forces who did not shift grounds.
Read also: One of the ISIS knifemen was a known terror threat, French police say
Sanders was on hand to name Clinton the nominee after the Vermont delegates were involved in the passing of a voice vote which was riddled by some 'nays' from other disgruntled delegates.
Posted by Unknown at 11:18 AM