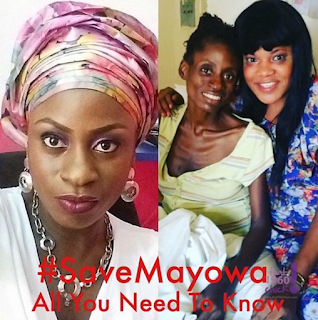 Family members of Mayowa Ahmed are claiming that Nollywood actorToyin Aimakhu and the founder of Lifesake foundation Ms Aramide Kasumu wanted a percentage from monies realized from the campaign initiated to save Mayowa but when the family refused their bidding they resorted to blackmail branding the whole process a scam.

A viral video obtained by a certain Abiyamo shows Mayowa’s brother (names withheld)  saying Lifesake foundation and Toyin Aimakhu were not interested in helping them for free and when they discovered that they were not going to get a penny from the campaign they resorted to blackmail tagging the process a hoax.
In a similar vein, screen munched tweets by Soliat Tobi Bolaji, a family friend who was with Mayowa's sister at LUTH, revealed that contrary to general belief that family members of Mayowa had deserted their home after the money was raised, some of them were at the hospital today.
The police have reportedly questioned the founder of Lifestake foundation and two family members of Mayowa in the persons of Mr Iwaloye Seun and Mrs Zaneen Ahmed as they hope to unravel the mystery behind the case.
An order has also been issued by the police to freeze the Access bank account opened in the name of Mayowa and efforts are also in place to contact the managers of Gofundme online account so as to ensure funds raised through that platform is not fraudulently diverted. 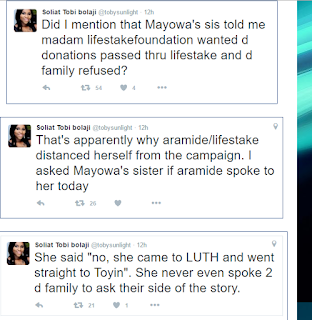 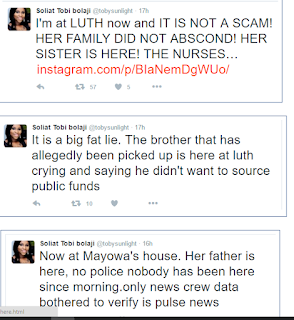 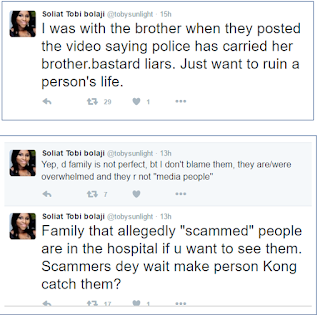 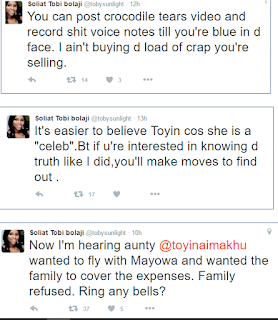 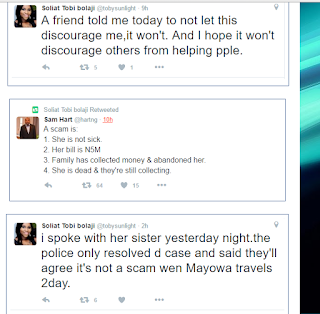