Widows without sons in Mozambique accused of sorcery

After Marcia Madeya's husband died his brothers accused her of witchcraft, stole her fruit trees, crops and goats, and shared them out between his other wives.
Kicked out by her in-laws, the mother-of-three sleeps in the open, eking out a living by selling fruit and dolls on the roadside in this remote corner of eastern Mozambique.
"The pain eats me every day," she told the Thomson Reuters Foundation as she cooked dinner over a fire.
Madeya's problems come down to the fact that she had no sons.
"I was first wife to a man who was married to four other women," said the 44-year-old widow. "On his death, my yam crop field, 20 mango trees and 15 goats were grabbed and distributed to his other wives who bore him sons."
Her husband, who worked as an illegal gold miner in South Africa, died of HIV. But she says his family accused her of "bewitching him to death".
Although the law gives men and women equal property rights, the reality is very different in eastern Mozambique, one of the country's poorest regions.


In the Chikwidzire district of Manica province, which borders Zimbabwe, deeply patriarchal cultural traditions stipulate that a woman without sons must cede her land to relatives upon her husband's death. 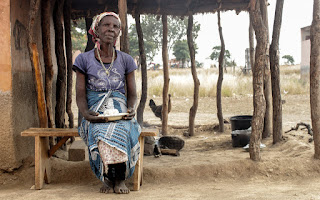