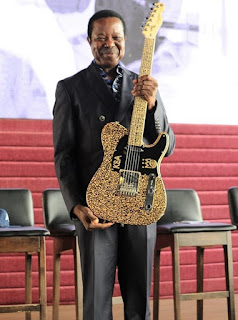 Contrary to reports making the rounds that Tunde Folawiyo, son of late Nigerian businessman, Wahab Folawiyo, surprisingly won the winning auction bid of N52.1million for King Sunny Ade’s Fender guitar, produced in 1950, the organisers of the auction have denied such claims.
In a statement signed by the platform, Temple Management Company clarified that its chairman, Mr Tunde Folawiyo did not participate in the bid contrary to widespread reports that he purchased the priceless guitar.
Meanwhile, before it was auctioned, the guitar which has been caressed by the fingers of the music legend on several stages across different continents, received the artistic signature touch of celebrity Nigerian visual artist, Victor Ehikhamenor.
The visual artist while speaking on his painting said; “My number one goal is to put Nigerian art in the forefront of decision makers, industry leaders and as many Nigerian citizens as possible.
Continuing, Ehikhamenor added that; “What has happened with KSA is a unique opportunity and I am glad Temple Management Company is of the same vision and mind set to keep repositioning the arts. The sale of this guitar was not just about KSA or Victor Ehikhamenor. This is about nation building which I daresay is universal; art is what makes great nations.”
Posted by Unknown at 9:24 AM