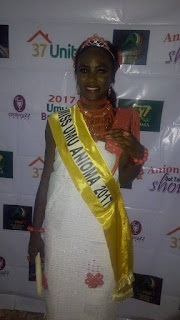 
Miss Obi emerged top after all the contestants were drilled during the Miss Umu Anioma Beauty Pageant which is  part of the events of the 2016 Umu Anioma World Convention.

The ten young queens were drilled in four major areas in order to be selected as the Beauty Pageant Winner, including: traditional outfit, platform competition (catwalk), photogenic, evening gown and interview session.

The theme of this year’s convention is tagged: “Discussion On The Determinants of Prosperity” and another major activity in form of talent hunt was also added to the pageant.