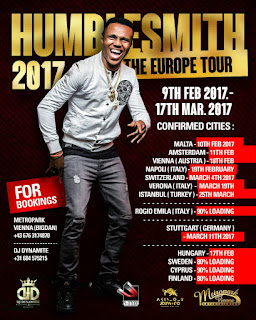 
The high-life musician has been booked for the next five months in these cities and he’s ready to give his fans across the world a performance of their lives.
Starting from the February 9th to March 17, Humblesmith will joggle between Malta, Amsterdam, Vienna (Austria), Napoli (Italy), Switzerland, Verona (Italy), Istanbul (Turkey) while cities such as Rogio Emila (Italy), Stuttgart (Germany), Hungary, Sweden, Cyprus and Finland are between 90 and 80 percent confirmed.
Between March 18th and April 20, Humblesmith will tour between London, Liverpool, Aberdeen, Glasgow, Manchester, Birmingham, and Leeds.

He will also be in the United States of America from May 1st to 31 where he will be performing to his fan base in the country
Posted by Unknown at 8:31 AM