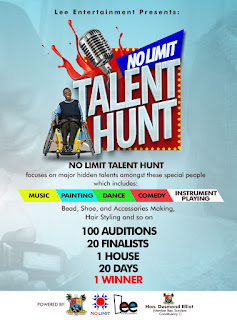 A new talent hunt and reality TV show, ‘No Limit’ is about to launch on April 25, 2017, but with the focus on the physically challenged as opposed to having those with full body parts.


When we hear talent hunt and reality Television shows, we don’t think of the physically challenged people but this is what makes No Limit Talent Hunt and Reality Show a commendable initiative. It is designed to house over 20 physically challenged people and train them in various skill sets which will be put to weekly test, showcase and voting. At the end of the four weeks competition, five top winners will emerge to win the grand prize while the other contestants would have gained exposure, training and support from the large network of instructors and public.
The ‘No Limit Talent Hunt and Television Reality Show’ is endorsed by the Lagos State Government. It is seeking more support from brands and individuals who feel burdened just like the organisers to do something for the physically challenged also instead of just focusing on those who have all body parts.
The talent hunt and reality show will broadcast every week on major Television stations which will help project the physically challenged contestants and their skill-sets to the world. Partnerships with major Television stations are being concluded while the organisers still hope for more.
Posted by Unknown at 10:53 AM