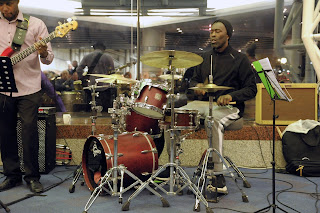 Ebo which translates in Babalola’s native Yoruba language as a ‘traditional offering,’ is a beautiful nexus between the percussionist’s funk music and his Ifa way of life.

The anticipated concert has been scheduled to tour major cities in the UK from June and will be powered by the Sacred Funk project and his agency, Temple Management Company.

The Ebo Tour kicks-off on Saturday June 17th at Somerfest Festival, Somerset featuring spoken word by Dr. Olu Taiwo. The Sacred Funk train moves to Mostly Jazz And Funk Mosley Park in Birmingham on July 9th.
It makes its next stop in Manchester at Band On The Wall on July 27, 2017. Other schedules include Colchester Arts Centre, Essex on Sunday, September 24thh, Vortex Jazz Club, London on Thursday, September 2017 and The Canteen, Bristol on September 30th.
A protégé of the late Fela Kuti, Lekan Babalola has twice won Grammy Awards with artists Ali Faka Toure and Cassandra Wilson.

Babalola, who is based in Birmingham, UK, is currently touring the world with the Atomic Bomb - The Music of William Onyeabor featuring the likes of David Byrne (Talking Heads), Money Mark (Beastie Boys), Alexis Taylor (Hot Chips) and many others. 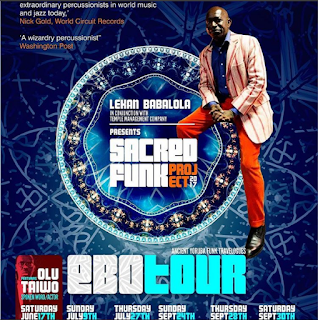