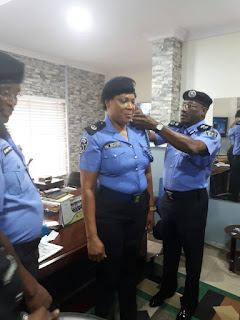 
In a statement released by the Lagos state Police Public Relations Officer, PPRO, Olarinde Famous-Cole, the promoted senior officers were decorated today by the Assistant Inspector-General of Police in Charge of Zone 2, AIG Adamu Ibrahim and Lagos Police Commissioner, CP Fatai Owoseni.
The promoted officers are - ACP Edgal Imohimi to DCP, CSP Hope Okafor to ACP, CSP Muyideen Obe to ACP, CSP Bunmi Ogedengbe to ACP, CSP Lawal Adebowale to ACP, and two others.
In a related development, AIG Taiwo Lakanu has arrived at the Lagos Police Command on the directives of the Inspector-General of Police to intensify training on the use of firearms and respect for human rights especially for policeme in Lagos .
According to PPRO Famous-Cole, Taiwo's tour to various police commands is another selfless approach in bringing police closer to the people whom they have vowed to serve an protect.
Posted by Unknown at 7:13 AM