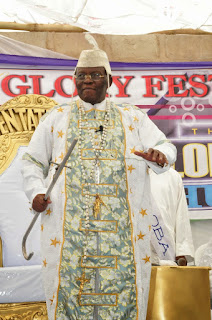 A lot of people speculate and many are eager to know much about this spiritual giant of our time. This generation and particularly Nigeria is blessed for having such a righteous man raised in a corrupt world of ours.

Olutanmole is the spiritual head of Kingdom of Heaven on Earth Mission (KIHEM), the holy throne of God on earth.
His attitude to worldly things distinguishes him among others, especially his fellow men of God, as he has zero desire for worldly glory.
He has been an exemplary preacher and teacher of righteousness for more than 50 years and has not acquired a house of his own, no landed property, no personal bank account and has only one wife who has been laboring with him in the kingdom.
He started as a practising Christian and devoted member of a church located at the eyebrow of Ilupeju, Lagos mainland. He became head of the church by divine appointment after the demise of the founder. He believes in doing things right and his doggedness and uncommon discipline brought sanity back to the church which was ridden with corruption then. He demonstrated rear leadership style of selflessness and this made people love and become attracted to him.
Right from the beginning of his encounter with Christ, he vowed not to call any earthly thing his own, because Christ owned nothing. He declared in front of a mammoth crowd that he would never leave any material legacy for his biological children because all properties belong to the ministry.
He believes all teachings of Christ as written in the scriptures should be deposited in the lives of followers of Christ and not to be read as novel or newspaper hence he teaches his followers not to leave all life changing doctrine of Christ in the Bible but make it their way of life.  He is teacher of eternal life just like Jesus.
He earned the title, Christ’s representative, because he practically demonstrates Jesus and teaches  people what he practises.
Those who are familiar with him will testify to his tough preaching against sins and iniquities on radio in the 70s, 80s. His famous theme then was John 16:8 – ‘sin, righteousness and God’s judgment.’
And viewers of MITV, NTA 10 television stations around the year 2000 will not be unfamiliar with his judgment hour message.
His consistent and unwavering life of righteousness and selfless love of his fellow humans endeared him to God who appointed him the restorer of all things in this awkward age. God handpicked him to restore the elects to divine righteousness before the second coming of Christ for judgment because he is the advocate of total reformation of humanity. He believes in the second coming of Christ as prophesied in the Bible but teaches that judgment shall commence in the house of God (I Peter 4:17).
He became the recipient of the kingdom throne of the father of Jesus after he had a spiritual encounter with Christ himself at the end of his sojourn in a remote, mountainous wilderness for seven days without food and water, and was given the mandate to preach the gospel of the kingdom throne of the father of Jesus prophesied in the scripture in Daniel 2:44, Matthew 6:9 and Matthew 24:14.) as the end time ark of salvation.
He has been given a unique mission by God to rescue his own generation from the wrath of God and prepare the elects for the perfect world after second coming of Christ for judgment.
He is not God and has never called himself Jesus but that he is sent to demonstrate Christ in physical realities.
His love life which demonstrates what is written in the scriptures is awesome. He is impressed, stunned by the sacrificial shedding of His blood for unknown sinners by Jesus and vowed to also be donating his own blood to resuscitate lives of people who are dying for lack of blood in the hospitals.
He gives scholarships to many who are not members of his ministry. He adopted children from orphanages and gave them meaningful lives.
His doors are open to all who wish to know him, and he has been graced to pen down so many life changing doctrines which you can study to get acquainted with King Olutanmole Agbaye, the unique man of God that if you don’t know him already, then you need to start doing so now so you can be convinced on a firsthand basis of his heavenly, Christ-like virtues.
Posted by Unknown at 4:47 AM