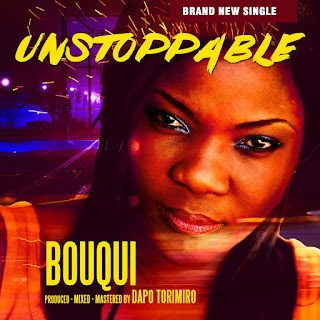 Foremost Nigerian rap queen‎ B.O.U.Q.U.I who is known for her sublime and relentless energy at churning out superb and astounding sounds/visuals is out with a brand new single "UNSTOPPABLE" produced by the multiple awards wining Nigerian – American producer "Dapo Torimiro".Since relocating to the USA, the rapper who had earlier bagged an Acting/Directing certificate in Hollywood, later joined forces withmulti- platinum record Producer, the man behind John Legend's Quickly featuring Brandy, Frank Ocean, Jordin Sparks' No Parade and Justin‎ Bieber's Bigger "Dapo Torimiro" to create what is tagged the sound ofrevival, a song for the tried and tested, a war cry for the chosen generation.
Unstoppable is more than just a song but a declaration of hope to a dying generation and that which encourages us to stand like stallions, roar like lions and beat our chests because we are CHAMPIONS".
The song was produced, mixed and mastered by Dapo Torimiro in Los Angeles, California and it's the First single off Bouqui's 5th studioalbum.
A cutting edge video for the song is currently in progress and will be shot in Atlanta Georgia.COMPETITION
Record your own version of Unstoppable and win a free recording session with Dapo Torimiro!!!To participate, Go to the link , download the soundtrack with chorus and record your own version of Unstoppable. Send to: Muziqglobe@gmail.com and upload to any file sharing platforms while you also share with friends and family. Don't forget to tweet @Dapotorimiro and @bouquiofficial.‎The best version gets a free recording session with Ace producer Dapo Torimiro and runners up get to appear in the video in the USA.. All expense paid.
Sent from my BlackBerry 10 smartphone.
Posted by Unknown at 9:21 AM