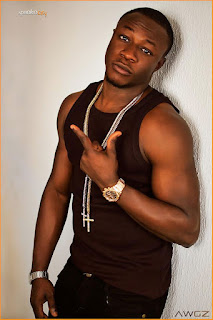 This is certainly the best of times for talented R&B act, Chuddy K who has just penned a mouth watering endorsement deal with popular brand, Tecno Mobile.
The talented artiste now joins other music stars such as Dammy Krane and MTN Project Fame Season 7 the 2nd runner-up, Krissy O as brand ambassadors to Tecno Boom.

Chuddy K was born Chukwudi Ken Agali on the 15th Of July, 1984 to the family of Mr. & Mrs. Agali who hail from Utwue Ogume, Local Government Area of Delta State.
He grew up in a Lagos suburb called Ajegunle where he attended his primary education at Queens care nursery / primary school, he later moved out of Ajegunle to Agboju Amuwo near where he had his secondary education at Awori Ajeromi Grammar School and then moved to Upper College, Aiyetoro-Ijaninkin where he wrote his WAEC examinations.
His life as a youth was not a pleasant one, which contributed to his moving around to get education. The ebony singer at some stage in his life sold pure water and also did brick laying job, to raise money so he could buy his GCE form after leaving secondary school. He also did some other odd jobs to see himself through school and life until he ventured into music to make a name for himself.