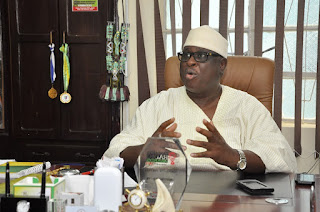 The Reality Entertainment, organisers of the Nigerian Broadcasters Merit Awards which is in its sixth edition strove hard to fill the vacuum left by the highly respected culture aficionado, broadcaster, patron of the arts and diplomat, Ambassador Segun Olusola who died on Thursday June 21, 2012.
The search for credible persons suitable for the position has been concluded and as a result,  Alhaji (Dr) Ahmed Tijjani Ramalan has been announced as the new Patron of the Nigerian Broadcasters Merit Awards.
Dr. Ahmed Tijjani Ramalan, the Executive Chairman, ATAR COMMUNICATION Nigeria Limited, needs little or no introduction to those who are conversant with Kaduna broadcasting industry. Aside being the owner of Liberty Radio, Tashar Yanci 91.7 FM and Liberty TV, the upwardly mobile radio and TV stations in Kaduna, the Business Admin Graduate of American University of Richmond, London, has written his name in gold for his outstanding contribution to the growth of quality broadcasting in the Northern part of Nigeria, hence his Lifetime Achievement award at last year’s edition of NBMA.
Speaking on his new role as the Patron of the Nigerian Broadcasters Merit Awards, he said, “I find it a rather unique privilege to have been approached to be patron of the Broadcasting Merit Awards in the aftermath of the "larger than life" image and enormous impact of the inimitable, highly revered former Grand patron, the immense Ambassador Segun Olusola. May his soul continue to rest in peace.  It is indeed a challenge I look forward to, if only to attempt to match what the mercurial icon of the Arts and Media had done. I can only hope to contribute my quota to uphold and further uplift the standard set so far,” Dr. Ramalan said.
It would be recalled that a seasoned broadcaster, Femi Sowoolu was announced by the organization in 2013 as NBMA’s first patron.
However, this year’s edition of the prestigious award, NBMA is  scheduled for Saturday January 23rd, 2016.
Posted by Unknown at 9:00 AM