Stars Turn-Up For 'Do Good' Launch 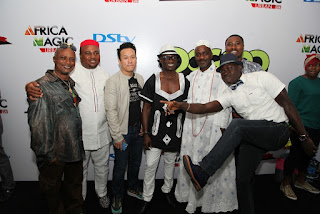 The Old Ballroom of the Oriental Hotel in Lagos was the scene of an extravagant display of colour, glitz and glamour as the entertainment industry’s finest came out to celebrate the launch of Africa Magic’s new sitcom, Do-Good.
Staged on Monday, 6 July, the event which was anchored by popular stand-up comic and actor, Bovi, had in attendance Nollywood stars like Kate Henshaw, Emem Isong, Basorge Tariah jnr., Charles Novia, Ini Edo, Funlola Aofiyebi-Raimi, Funmi Holder, Segun Arinze and Toyin Aimakhu amongst many others.
Speaking at the launch, the Regional Director, M-Net West Africa, Wangi Mba-Uzoukwu, said: “At Africa Magic we are dedicated to creating and showcasing the best content made by Africa for Africans. This is in line with our investment strategy and our long lasting relationship with the African entertainment industry. It is also in line with this that we are launching Do-Good, a first of its kind Pidgin-English sitcom airing on Africa Magic Urban, which promises to be a hit with comedy lovers across the continent.”
Do-Good is a spin-off of the popular 1990s Nigerian drama series, Candlelight, and features the exploits of the titular character Do-good, played by Tariah, who returns from his travels abroad to woo his sweetheart Emem, a character played by popular Nollywood actress Kate Henshaw. The show is the latest in the line of exciting content that continues to appear on the Africa Magic channels like The Johnsons, another popular sitcom; Highlites with IK; Hotel Majestic and other viewer favourites like Tinsel, Jara, and 53 Extra.
Monday’s show featured performances from rave of the moment musician Kiss Daniel, who thrilled the audience with his hit tracks, and stand-up comics Mong Kals and Don Okiemute Iruvwe, who also feature as recurring cast members on Do-Good.
Mba-Uzoukwu added: “It is an exciting time for Africa Magic as Do-Good marks a return to television for Kate Henshaw and Basorge Tariah Jnr. Many of you remember when they previously acted as Emem and Do-Good respectively in Candlelight, and the launch of Do-Good introduces these characters to old and new audiences alike, by telling an exciting and funny story of ambition and finding love. Our viewers should make sure to tune in and catch all the fun and humour that Do-Good brings to the screen.”