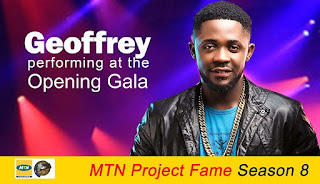 In less than a year since he won the Season 7 of MTN Project Fame, Geoffrey has risen to significant heights in the Nigerian music industry. He has steady been at work, recording music and shooting videos with the latest one, Monalisa released a few days ago to positive reception, the same way his debut single Bursting My Brain was well received.
On Saturday, 1 August, Geoffrey will be returning to the Project Fame Academy to kick off the 8th Season of MTN Project Fame, alongside other previous winners. He will be performing his most recent release, Monalisa.

We use this nostalgic moment to reintroduce Everyday Is A Chance, a song composed and recorded while Geoffrey was in the Project Fame Academy as a contestant last year. Everyday Is A Chance is a song of enlightenment and encouragement, motivating listeners to pursue their dreams and keep striving.

Sent from my BlackBerry 10 smartphone.
Posted by Unknown at 7:58 AM