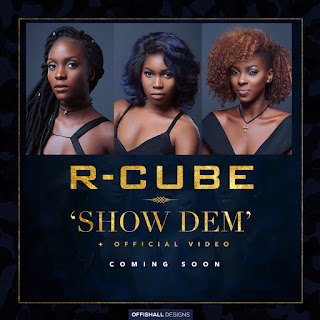 Following their success as contestants on the MTN Project Fame TV series, girl group, R-Cube made up of three sisters - Ruky, Rubunu and Ruona are set to officially make a debut on the scene.
Ruky and Rubunu had auditioned for the 7th season of Project Fame in 2014 and after months of hard work in the Project Fame Academy, they emerged as finalists on the show. They both then came together along with Ruona who had just come back to the country after acquiring a law degree, and they created R-Cube under the management of Ultima Productions/960 Music.
Since inception, R-Cube has been hard at work creating beautiful music and making special appearances at several events. Within the last few months, they have been headlining artists at Freedom Hall's Women Arise Concert, Information Communication & Telecommunication Expo at the Eko Hotel, AFRIMMA Industry Nite, as well as being featured on MyStreetz Magazine.
Posted by Unknown at 9:05 AM