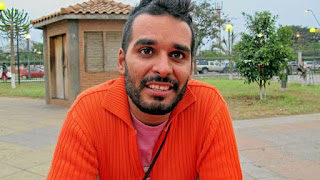 A rapper is among 17 activists who have gone on trial in Angola's capital, Luanda, charged with preparing acts of rebellion and plotting against the president and state institutions.
Luaty Beirao was arrested in June with book club members discussing a book about nonviolent resistance.
Mr Beirao recently ended his five-week hunger strike in prison. Their arrest prompted protests in Portugal and condemnation from human rights groups.

Human Rights Watch's Zenaida Machado urged Angolan judges to "show independence and not permit this trial to be used as an instrument to silence the government's critics".
The rapper, also known by his stage name Ikonoklasta, has been an outspoken critic of the government, calling for a fairer distribution of the country's oil wealth.
Since the end of the conflict in 2002, Africa's second-largest oil producer has witnessed an economic boom, but critics of the elected government say the wealth has only benefited a small elite.
The detained activists, who belong to a youth movement, had previously held demonstrations demanding the resignation of President Jose Eduardo dos Santos, who has been in power for 36 years.
Their book club had planned to discuss the 1993 book by Gene Sharp called From Dictatorship to Democracy: A Conceptual Framework for Liberation.
The June arrests were defended by Angola's deputy state prosecutor who accused them of planning an uprising among students and workers "with incalculable consequences".
The group face up to 12 years in jail if convicted.
He is credited with the strategy which led to the toppling of Egypt's long-time Hosni Mubarak leader in 2011.
His most translated and distributed work, From Dictatorship to Democracy, was written for the Burmese democratic movement in 1993, after the imprisonment of Aung San Suu Kyi.