Police in France and Belgium are still hunting for a suspect they believe was involved in the recent attacks in Paris that killed at least 129 people, as they carry out raids across the two countries that have so far resulted in arrests and seizing amunition.
French police raided 168 locations across the country and detained 23 people accused of being members of a sleeper cell behind the Paris attacks.
France's interior minister, Bernard Cazeneuve, said on Monday that police arrested 23 people overnight and recovered weapons.
He added that the raids are "just a start" to France's response to the Paris attacks and "the response of the Republic will be huge, will be total".
Heavily armed Belgian police also launched a major operation in the Molenbeek neighbourhood in Brussels. Several of the suspected attackers have links to France or Belgium.
The government there has increased the threat level for major public events, which is likely to result in heightened security, including a military presence.
Hunt for suspect
French police released a photo of one suspect yet to be found - 26-year-old Salah Abdelsalam, born in Brussels.
Abdeslam was reportedly stopped and questioned by police at the French-Belgian border before he was allowed through.
He is the brother of alleged attacker Brahim Abdelsalam, who was killed on Friday in Paris.
Salah Abdelsalam was 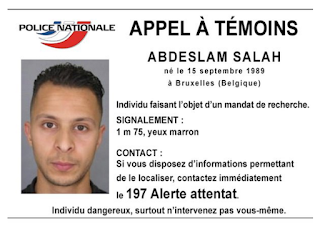