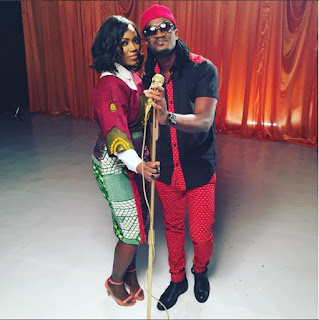 Aspiring brands have continued to leverage on the popularity of celebrities to further promote their goods and services as more entertainers are penning deals to become brand ambassadors for various business concerns.

Information making the rounds, especially on social media suggests that both Paul Okoye (one half of P Square) and Tiwa Savage may have penned undisclosed deals with a yet-to-be named fabric company.
Paul and Tiwa are said to be currently neck-deep in the studio shooting an ad campaign for the unidentified outfit. Studio pictures of both of them wearing fabrics of the unnamed company is now trending on social media.
Both acts have however called on their fans to keep their fingers crossed for the official unveiling of the brands which they will both represent as ambassadors.
Hours ago, Peter Okoye (the other half of P Square) sealed an ambassadorial deal with top sports wear company, Adidas.