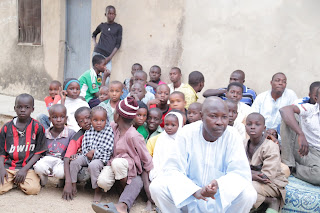 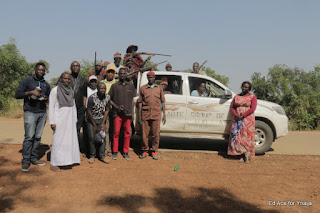 As part of the 100-city tour for The Future Awards Africa’s (TFAA) 10th anniversary, the awards visited conflict zones across the North of Nigeria last week – to highlight challenges, spotlight inspiring stories and set up hubs to solve problems at scale.

The delegation was led by the co-founder of TFAA, Chude Jideonwo and visited Chibok, Mubi and Yola. The tour, led by project managers Bukonla Adebakin and Seun Oluyemi had previously visited Enugu, Banjul, Badagry, Ibadan, Akure, Port Harcourt and Kano.

The tour has a three-pronged focus: a) re-focus attention on the issuesyoung people are facing across the continent, b) the case studies of how TFAA’s global brain trust has solved these issues and then c) set up hubs in each city - made up of past winners, nominees, partners and volunteers at community-levels – to solve these problems.

“The stories and the people we have met on this trip have confirmed some of our worst fears, but more importantly also fired up our resolve,” said Jideonwo after the tour. “There is so much work we have to do, and we are building a network of problem solvers across the continent to engage, solve and sustain the solutions to these problems.

“We are celebrating 10 years of TFAA, but more importantly, we are fired up to begin 10 more years of building entrepreneurs, supporting change makers and transforming societies.”

“The challenges we saw on this tour are enough to make you worry,” said Mohamed Diaby, a member of the Central Working Committee, from Abidjan. “From young people feeling their own communities and countries to communicable diseases from recused individuals coming back into town, rebuilding of clinic/hospital, school, bridge and markets, education, employment, drug use, to cities that urgently demand government reconstruction, there is so much work left to be done. We are determined to lead an army of young people, through our hubs, to do this urgent work, to solve these problems.”

Hubs have now been set up in Mubi with the Initiative for Human Rights, Yola with Centre for Caring, Empowerment and Peace Initiative (CCEPI) and Chibok with the Red Cross. These hubs will work together with the Global TFAA Secretariat to pull resources and media attention to solve the identified problems in each community.

The next stop for the tour is Johannesburg, South Africa, after which phase one of the tour will conclude.

The Future Awards Africa 2015 is powered by RED and held in partnership with the Ford Foundation, Microsoft, the US Consulate, the Canadian High Commission Nigeria and The Tony Elumelu Foundation. The event will be hosted in Lagos on Sunday, 6 December, 2015.