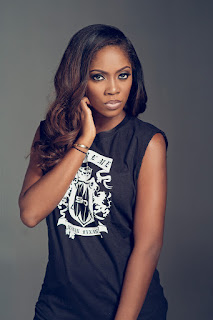 Weeks after Mavin first lady, Tiwa Savage harassed a photographer, who attempted to take pictures of her five month old baby, the pop singer has finally bowed to mounting pressure from her fans who want to know more about her baby.

Scores of fans and close watchers have really been disturbed over the reasons Tiwa has been so secretive about their bundle of joy with only a few of her friends and close relatives having the exclusive opportunity of seeing what the baby looks like.

In a move to somewhat satisfy the yearnings of her fans, Tiwa finally bowed to the pressure when she gave out the name of her child via her twitter handle stating that she and her husband , Tunji ‘Teebillz’ have decided to name their baby boy ‘Ivory’.

The only two pictures of the Tiwa’s baby posted on social media is the one shared by Teebillz which pictures him holding the hand of his new born son saying ‘Thank you Jesus”.

The other public photograph of her baby born in July was posted by Banky W when she gave birth. The Instagram picture at that time only showed the baby’s feet.