Burna Boy has officially launched his highly anticipated sophomore album, On A Spaceship (#OAS), with a mind blowing performance on stage at the 25th November 2015 edition of Industry Nite at Spice Route, Victoria Island, Lagos.It was a super charged night at the weekly event, hosted by Spanky and Dj Consequence, with BurnaBoy headlining. A number of upcoming acts opened the show with thrilling performances including YCee and Saeon, who performed together, as well as Phenom and Milli.
Burna Boy arrived on stage in grand style and to a rousing reception from ecstatic and kicked off with the intro of #OAS setting the tone for the anxious expectation of the album by the capacity crowd. He delivered track after track with his trademark energy and dexterity including the hugely popular “Soke”, the album’s only bonus track.
The highlight of the show was the performance of the track;“On A Very Good Day”. During the performance of the song, Burna Boy was joined on stage by a host of artistes including Iceprince, DammyKrane, Small Doctor and even the show’s compere, Spanky. The performance wowed the crowd so much that a clamour erupted for an encore!
Burna Boy fans and celebrities who were in attendance were unanimous that the show was the best ever industry nite at the Spice Route they had ever witnessed. 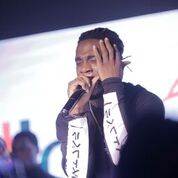 Lots of people leaving the show were overheard saying that after watching Burna Boy on stage and listening to him perform songs from the album, purchasing the #OAS had become a must.