Hennessy has celebrated its 250th anniversary in grand style, proving to consumers and enthusiasts that it is a timeless brand with heritage through different activities that were programmed to portray the theme “crafting the future”.

The final event – the H250 concert – held on Saturday November 28, 2015 encapsulated the entirety of the celebrations, bringing it to a thrilling close. Addressing the excited audience, brand manager;LereAwokoya expressed Hennessy’s appreciation to fans worldwide in what he described has ‘a momentous and eventful 250th celebration’. He implored everyone to “never stop never settle” in their goals to aspire to dream and assured of the brand’s desire to improve as well as stay consistent to its consumers.

Performing at the event were Tekno, Kiss Daniel, Adekunle Gold, and a host of other Nigerian acts with hit songs currently making waves on the Nigerian music circuit and all released in the year of the 250 anniversary – 2015. In what became the high point of the evening, a surprise performance by former headliner and Afro Juju crooner Sir Shina Peters, threw the entire crowd into a frenzy as everyone stood up to dance to the pulsating beats from his evergreen hit album – ‘Ace’.

The concert also showcased Production performances, with the spotlight on producers who have made an impression on the sounds of the Nigerian music; Jesse Jagz, Chopstix, Tee-Y Mix and Sarz reeled out hit tracks that have given credit to their respective brands with Ice Prince supporting Chopstix with his track “Aboki” and Naeto C delivering “Tony Montana” in support of Tee-Y Mix.

The highlight of the evening was the back to back appearance of the 2015 headliners.

R&B star Praiz performed some of his hit tracks and took the guests straight to the Hip Hop cruise as Vector and Burna Boy closed the show for the night with mind-blowing performances. ‘The Time Barrel’ was on display at the end of the red carpet, and guests were allowed to step in throughout the evening and experience the time capsule as well as record their messages for future generations. 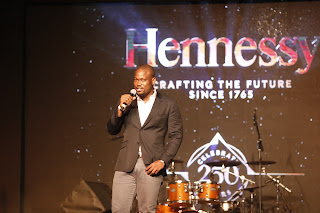