It was a wonderful time for the hundreds of students who attended the recently held 14th session Career Counselling Day hosted by Etisalat Nigeria, as they were treated to live thrilling performances by Nigerian-born afro-pop act, Sean Tizzle.
The ‘Sho lee’ crooner, clad in white top and black jean pant, was an instant hit with the students who could not hide their excitement at coming face-to-face with him and sought to touch him. They demonstrated this by singing along as he performed several songs from his works including his debut single "Sho Lee" which has enjoyed massive play time on radio and TV since it was released in 2013.
Sean Tizzle’s soaring popularity appears to have broken the age barrier and now resonates with the elderly as some of those in attendance at the event also joined the students in the excitement.
It was not however, all fun for the students as Sean Tizzle real name Morihanfen Oluwaseun Oluwabamidele, took out time to task the students on reaching the utmost height of their potentials. He enjoined them to strive to recognise their strengths and work hard at maximizing such.
In a related development, Etisalat has reiterated its commitment to national development using sustainable CSR platforms such as health, environment and education which he described as very key.
The company’s Vice President, Regulatory and Corporate Affairs Etisalat Nigeria, Ibrahim Dikko, gave this assurance while speaking at the event. In his words, “Education is the source, the spring of growth and development. When education is gotten right, every other aspect of life benefits, including health, the economy and our planet. We are committed to Corporate Social Responsibility agenda and we will apply ourselves to driving the sustainable development of our nation, Nigeria.”
The Career Counselling Day was hosted by Etisalat in partnership with the Lagos Empowerment And Resource Network (LEARN)  and it is designed to guide students of secondary schools in the junior and senior levels towards making sound, positive and fulfilling career decisions which will provide long-term benefits to them, their families, organisations, and ultimately the nation. 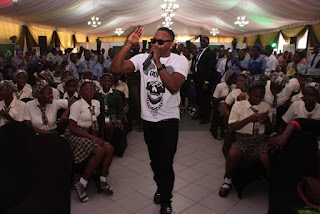