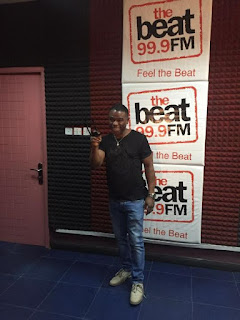 The smooth guitarist and singer, who entered the country yesterday alongside fellow headliner, Rick Braun, was at the Beat FM studios earlier today for an interview. He was joined by other artists on the festival lineup including Femi Leye, Jon Scott and Sax Tee.

SJL '16 officially kicked off on Wednesday, 27 April, 2016 at Industry Nite where the festival's first IJD Pre-Countdown of the festival London-based Afro-soul musician Jon Scott and saxophonist Sax Tee performed together. On Thursday, the second IJD Pre-Countdown event was held at The Blowfish Hotel with some more live music by Phebean, Jon Scott & Sax Tee.

The IJD Countdown (Concert and Culture) coming up on Friday, 29 April, 2016 will be the highlight of the entire festival. Norman Brown and Rick Braun will perform alongside a star-studded lineup including Imoleayo Balogun, Phebean, Kaffy (Dance), Femi Leye, Carlo Rossi & The Organic Jam, Jon Scott & Sax Tee. There will also be a performance to enjoy from Guinness World Record Holder and foremost Nigerian dancer, Kaffy.

There will be IJD Celebrations the following day at Banana Island Park, in partnership with the Pattiserrie. Attendees will enjoy live music, dance and culture and get a chance to party with Femi Leye, Imoleayo Balogun and Carlo Rossi & The Organic Jam.

The festival comes to an end the same day - 30 April, 2016 - in grand fashion with IJD Closing Celebration & Afterparty at Vellvett Lounge & Bar. Jon Scott & Sax Tee and Carlo Rossi & The Organic Jam will be there to deliver more live music.

Sent from my BlackBerry 10 smartphone.
Posted by Unknown at 11:40 AM