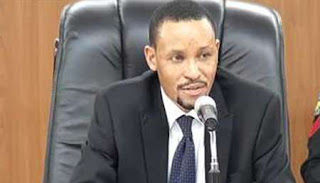 ‎A non-governmental group known as Come Clean Nigeria has called on the Economic and Financial Crimes Commission (EFCC) to explain why it dropped corruption charges again the Chairman of the Code of Conduct Tribunal  Danladi Umar.
In a statement signed by the groups Spokesperson, Nurudeen Agoro‎, the events in the Saraki trial have removed any doubt as to the true colouration of the campaign.
"We have been following events in the ongoing trial of the Senate President with keen interest. We are delighted to see that the Senate President is finally standing trial for alleged breaches of the Code of conduct Act despite all the preliminary objections raised by the defence against the trial. It is healthy for our democracy. Nothing else has reinforced the common man's belief in the rule of law than the sight of a Senate President in the dock.

"However, the most curious event so far in the entire episode was the decision of the Economic and Financial Crimes Commission (EFCC) to drop the corruption charges against the Chairman of the Code of Conduct Tribunal (CCT).

"Just when Nigerians were trying to make up their minds if the anti-corruption crusade of the current government is a sincere campaign or a political witch hunt aimed at whipping perceived political enemies into line, the events in the Saraki trial have removed any doubt as to the true colouration of the campaign.

"In specific terms, we would like to state unequivocally that the EFCC's decision to drop such serious charges against a public officer is suspicious. It is even more so when the charges are dropped in the prevailing circumstance of the Saraki trial. Indeed, Nigerians have noted that the CCT chairman began to work doubly hard to hasten Saraki's troubles following that EFCC decision.

"There is a video in circulation on social media that betrays the CCT's judge hostility to Saraki's team. It shows how the CCT Chairman was asking Saraki's lawyer to sit down, in a personal and confrontational manner unbefitting for Umar's position , effectively depriving the Senate President of fair hearing. We are forced to ask the question that has been on most people's lips: what level of horse trading has happened between Umar and the forces against Saraki? Could the newfound zest evident in Umar's handling of the Saraki case be linked to the EFCC's decision to drop the corruption case against Umar, especially given Umar's aggression toward Saraki happened just after the EFFC's publicised 'pardon'? We call the EFCC and indeed the FG come clean on such coincidence in the Saraki trial.

"While we believe that the anti corruption war must go on unhindered, but we cannot fold our hands and watch state institutions like EFCC dabble into any back room politics or "rub my back, I rub your back" judgement pact with CCT Chairman Danladi against an accused person.

"EFCC owes the public a duty to explain why they have to drop the case against Danladi Umar at such a crucial stage of the Senate President's trial." The statement read in full.

Sent from my BlackBerry 10 smartphone.
Posted by Unknown at 10:06 AM