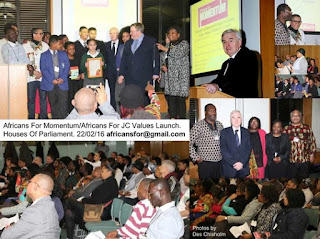 At the recent launch of Africans For Momentum (AFM) at the Houses of Parliament, shadow chancellor John McDonnell MP in his address said: "We want to create a society that is radically fairer, more equal, more democratic, that is based upon prosperity, but a prosperity that is shared by everybody."
For this to happen with a Jeremy Corbyn-led Labour government, McDonnell urged support for the Corbyn leadership in order to weather the onslaught from the establishment, sections of the press, other political parties, and some within the Labour Party "who hadn't yet come to terms with Jeremy being the leader."
He went on to add: "Africans For Momentum I think is a really good initiative, because if you look at our work over the years it's been about confronting racism, discrimination in all its forms in society, but also argue not just for equality but for social justice as well."
AFM believes that the majority of the British population, including many Africans, will benefit from a Corbyn-led government implementing the 10 points he's is standing to deliver.
For this reason AFM is convening the April 30 Africans For Jeremy Corbyn Values Conference to look at how to support by drilling down Corbyn's 10-point plan, and also learning from previous social and political activism.
The conference includes presentations and solidarity greetings by political activists Patrick Vernon and Marc Wadsworth, community activist Zita Holbourne, reparationist Esther Stanford-Xosei, and former president Kwame Nkrumah aide KB Asante.
"John McDonnell said two issues that underpinned the campaign for Jeremy Corbyn's Labour Party leadership bid were equality and social justice. We think it is important that we have a Corbyn/McDonnell led Labour government to make this a reality," said AFM secretary Awula Serwah.
"We should also learn from history, and for this reason we are looking at what we can learn from past community-led activism."
For more details or to book for conference: www.bit.ly/AFJCVConf
Posted by Unknown at 3:46 AM