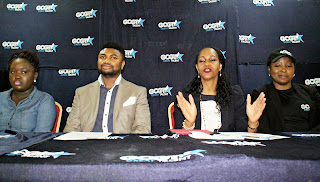 God’s Children Great Talent (GCGT) has today announced its progression into Grand Finale following the successful conclusion of its regional and quarter finals. The competition which saw over 2,000 entrants who participated for free has over the past couple of months through a keen contest, pruned down to 10contestants.

GCGT is a social development project of the RCCG Apapa family which distinguished itself this year by opening up its doors to a wide range of non – RCCG contestants across Nigeria. The gospel talent hunt is focused on discovering, grooming and producing young talents and stars in various fields of artistic expressions across Nigeria, the United Kingdom, Europe and the United States of America.
This year’s grand finale will be taking place on the 30th of May at the Eko Hotel and Suites Lagos and the competition will be presided over by leading performing and non-performing Artistes who will help  along with the audience votes to determine the winner of the  (N5m) five million Naira star prize.
Sarah Boulous, Founder of the Society for performing Acts of Nigeria (SPAN), Uti Nwachukwu, Dayo Benjamin-Laniyun, Wale Oni, Youth Maverick,  Zuriel Oduwole, Jeremiah Gyang and many others are the Grand finale Judges. Cobhams Asuquo will be the performing Guest Artistes.
One of the highlights of this year’s event is the release of a single by the GCGT Season 5 Brand Ambassador Ms. Praise Olorunsuyi, an undergraduate of the University of Lagos who won in the singing category in 2015.
Pastor Idowu Iluyomade; Head of Apapa family, explained that the vision of the initiative is to engage children/teens in a positive way, using their talents to glorify God in his words; “God’s Children’s Great Talent was born out of a desire to identify and nurture the diverse talents available in children. We are delighted a multinational brand such as Cadbury Bournvita, The  Address Homes limited, Airtel, The Riverbank School, Alexander Forbes, Businessday and many other media partners” are sponsors of the 2016 edition.


This year’s competition which is being televised and produced in Nigeria by OHTV is aired on DSTV’s Africa Magic, Dove Television and  Wazobia TV. Viewers will be able to follow the journey of the contestants from audition to the grand finale which will be happening at the Eko Hotel and Suites on the 30th of May.  At this grand finale, the winner will walk away with an Ngn5million prize, including a production contract, talent development packages and other attractive prizes.
Posted by Unknown at 9:58 AM