'The CEO' to premiere exclusively aboard Air France flight 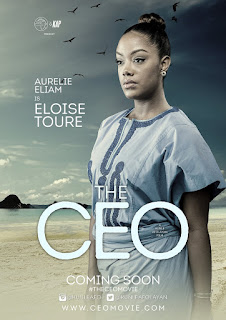 Wednesday, the 11th of May 2016 marked another milestone in the African film and television industry as Africa Magic and leading Nigerian filmmaker, Kunle Afolayan officially announced release dates and other plans for the highly anticipated pan-African thriller, The CEO. The announcement came during a press conference which held at the SilverBird cinemas in Ikeja, and followed a short screening of excerpts from the movie to excited guests, sponsors and members of the press.

The CEO will be exclusively screened on the 1st of June 2016 before a select audience on board an Air France flight from Lagos to Paris, in a first of its kind, in-flight premiere.

Set on a beautiful beach resort on the outskirts of Lagos, Nigeria, The CEO follows five top executives from across Africa who are dispatched on a one-week leadership retreat by a multinational telecommunications firm to determine who gets selected as the new CEO. Things go awry when one by one the executives are eliminated in sudden death circumstances, with the finger pointing to the last two remaining executive as prime suspects.

Speaking after the screening, the director and producer, Mr. Kunle Afolayan said: "The CEO is an exciting project, a truly pan-African film that boasts a stellar cast drawn from all across Africa. The movie will change the course of filmmaking in Africa, whilst undoubtedly and truly putting Africa on the global cinematic map."

Speaking at the conference, the Director, M-Net West Africa, Wangi Mba-Uzoukwu said: "The CEOpromises to be unlike anything we have ever seen from Africa. We are familiar with the stellar work that Kunle Afolayan does with his Golden Effects company and were therefore more than excited to jump on board The CEO project right from its inception. This partnership is in furtherance of our continued drive to support Nigerian and African cinema by investing in people, ideas and talent, and we can't wait for fans and lovers of good cinema to watch this movie."

"The special premiere of The CEO will begin with a Red Carpet show at the check-In counter at the Murtala Mohammed International Airport in Lagos. There shall be the best of media coverage from media partners such as Africa magic. For our sponsors, partners, the cast and crew of The CEOand those accredited to attend NollywoodWeek Paris, the fun continues with a cocktail party at the boarding gate. Thereafter, the movie will be screened onboard the plane where other passengers will get the chance to partake in the show. An after party follows the screening and you can literally imagine this happening 35,000ft to 40,000ft above sea level. It is sure going to be a unique experience. This will be followed by a special premiere at the NollywoodWeek Paris, taking place from June 2nd to 5th at the popular Cinema l'Arlequin," Afolayan added.

The movie thereafter comes to Lagos on the 10th July, 2016 with a grand premiere. On the 15th July, 2016, Silverbird Cinemas will release the movie in all cinemas in Nigeria and Silverbird Ghana.