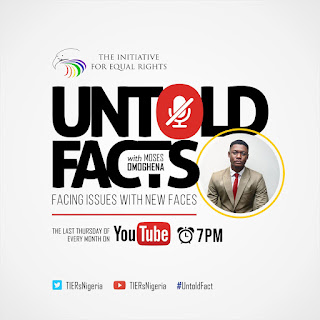 The 20-minute discussion show developed and produced by TIERs is geared towards enhancing the visibility of human rights, particularly sexual rights and sexual health rights in Nigeria. It hopes to encourage the creation of an alternative narrative to shape public discussions on issues of sexual orientation, gender identity and expression.

"UNTOLD FACTS will feature guests from diverse backgrounds including medical, legal, and social workers," said Olumide Makanjuola, the Executive Director of TIERs. "Guests will discuss a variety of sexual orientation and gender identity issues in the context of a broader human rights discussion, including, but not limited to, discriminatory laws and access to services for LGBT persons in Nigeria, the impact of these laws on LGBT and non-LGBT persons, ideas on sexuality and spirituality, violence based on real or perceived sexual orientation and gender identity, visibility, and coming out."

The show takes the form of a monthly series disseminated through the TIERs YouTube Channel. New episodes will be uploaded every last Thursday of each month at 7pm starting in May. Audience participation will be driven on social media platforms using the hashtag #UNTOLDFACT.