Celebrities turn-up for the premiere of Gidi Blues

Africa Magic, the continent’s leading provider of premium entertainment content, and ace Nigerian filmmaker Femi Odugbemi, will on the 4th of June premiere Gidi Blues, an unusual love story filled with intrigue and suspense told with a ‘Lagos-state-of-mind.’ Gidi Blues features a stellar cast which includes Gideon Okeke, Bukky Wright, Tina Mba, Lepacious Bose, Nancy Isime, Banky W and others. The movie promises high-quality entertainment with humour, music and drama, and also dwells on the unpredictability of Lagos city where anything can and often does happen.
Filmed in iconic Lagos locations like Idumota market, Makoko, Victoria Island, Isale Eko, Lekki, Freedom Park and Broad Street, Gidi Blues showcases Lagos city and the unique energy of its people. Akin, played by Gideon Okeke, is an indulged playboy from an affluent family who accidentally meets an interesting beauty, Nkem, in an unpredictable place. Nkem is a beautiful, confident but unusual young lady who devotes herself to her work as a community volunteer in the belly of the city’s worst slum. Their encounter drags Akin into a whirlwind experience that unravels his world.
Speaking on the movie, the Regional Director, M-Net West Africa, Wangi Mba-Uzoukwu said “Gidi Blues is the result of inspiring creativity, innovative filmmaking and exciting storytelling. At Africa Magic we take pride in bringing to life the best of film and television content out of Africa through partnerships with some of the best talent out of the continent and Femi Odugbemi’s work as a filmmaker is very well renowned. We are indeed excited to premiere Gidi Blues and cannot wait for movie lovers in Nigeria and indeed the rest of the world to see it.”
The movie also stars Hauwa Allahbura, widely regarded as one of Nollywood’s most exciting new talents, in the lead role as Nkem.  Hauwa currently features on sub-Saharan Africa’s most successful soap-opera, Tinsel.

Speaking further on the movie, the Producer and Director, Mr. Femi Odugbemi said: “Gidi Blues was exciting as it was challenging and we are extremely delighted with the finished work. The movie deals with the famous spirit of Lagos, the resolve within every Lagosian that confronts every challenge with the belief that all is surmountable.  Gidi Blues is also a love story which seeks to inspire young people to give back through community volunteer work. For example, Makoko, the fishing slum under the Third Mainland Bridge, is where the lead characters find meaning in their lives as they volunteer as teachers and also start initiatives that support and empower the disadvantaged in the community.”
Gidi Blues premieres at the cinemas on 24th of June 2016. 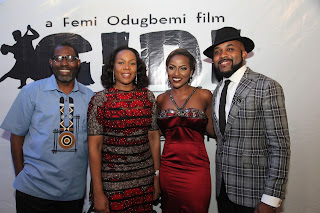 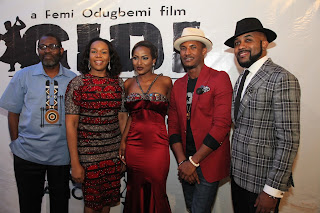