Customers of Lagos City Mall were recently thrilled to a live rock music performance while shopping in the mall. The live music performance was part of efforts by the management of the mall to make shopping a fun affair. The rock performance which was a first of its kind event at the mall featured renditions by Plus234 and 1 Last Autograph bands.
In a brief chat, Chike Jaywalker, who led 1 Last Autograph band said his band felt privileged to be invited to perform at the mall. He described Lagos City Mall as one of Nigeria’s iconic malls which has retained its class and appeal over the years despite the proliferation of malls in the country. Jaywalker said, “The Lagos City Mall is an iconic mall and we are privileged to perform here. This is a weekend and we know a lot of people visit the mall to shop and we decided to entertain them while they shop. We all are having fun here.”
The two band groups rendered soul serenading rock and contemporary music to the pleasure of mall visitors and fun seekers who had come out to relax at the mall.
Some of the shoppers described the event as a pleasantly shocking experience. “These guys swept me off my feet and I was pleasantly surprised. I had fun and I think this is a good one coming from Lagos City Mall,” a mall visitor who gave her name as Bolanle said.
The Mall Manager, Kayode Ogundele said the mall, in its bid to add value to the burgeoning shopping community is constantly thinking and strategizing on ways to engage, reward and entertain them.
“Lagos City Mall thought about twisting the normal shopping atmosphere by adding a touch of classical musical show that will further entertain its customers while shopping. This is posed to bring more attraction to the mall and also create a scintillating fun filled atmosphere to both young and old”, he said.
Mr. Ogundele added that that a top of the class restaurant would open in the mall soon to complement the other eateries and pubs that offer quality services to upwardly mobile people who live on the Lagos Mainland but work on the Island to get adequate refreshment while waiting for traffic to ease before going home.
He urged visitors and residents of Lagos to patronize the mall for their lifestyle shopping and entertainment. He said the mall would create more fun and social hub for the upscale south west of Ikoyi, Victoria Island and Lagos Island.
The mall boasts of retail brands in body & beauty, fashion, lifestyle, banking, telecoms, food and restaurants, health, grocery and supermarket, accessories and gift store, game arcade, multi-purpose event hall and entertainment aimed at creating a renewed and memorable shopping experience.


In recent times, the mall has stepped up its customer engagement activities and value added services to tenants and visitors alike. 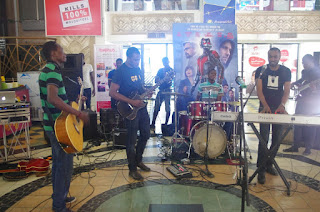