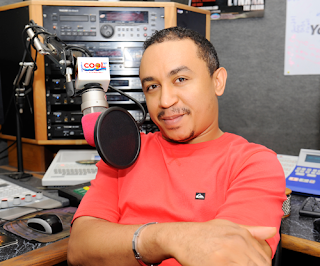 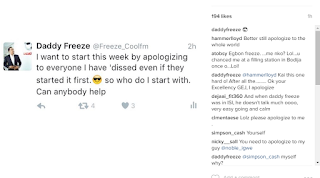 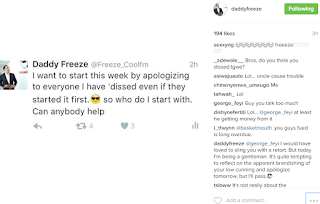 No-holds-barred radio personality Freeze of Cool FM took to Instagram this morning to apologize to those he has tongue lashed in the past saying he wants to start this week by saying sorry even though some of them may have started the war of words in the first instance.

The fair skinned Osun State indigene who also has roots in Transylvania, Romania is known for his vocal and sometimes scathing comments on issues he is comfortable with.
“I want to star this week by apologizing to everyone I have dissed even if they started it first. So who do I start with, can anybody help?” Freeze posted on Instagram.
Read also: Omotola celebrates ban of underage marriage in Tanzania and Gambia
Continuing, the on air personality who has over 15 year of experience as a radio presenter said; “Chai, ok, dear Bright, you are my brother from way back, still love you despite all and if I have offended you, please forgive me,” he begged.
Freeze also took time out to apologise to former Nigerian President Goodluck Ebele Jonathan with his post reading thus; “Ok your Excellency, GEJ, I apologize”.
Recall recently, that Freeze, in an open letter posted on social media networking site Instagram called out embattled Ekiti State Governor saying Fayose's attempt to smear the name of Mrs. Buhari and his claim that Zenith bank funded his last electoral campaign is getting scary noting that his desperado way of playing politics is becoming too embarrassing.
Posted by Unknown at 10:34 AM