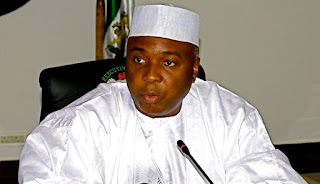 The Nigerian Senate in a series of tweets posted on its time-line some hours ago informs that moves to block proposed increase on internet data tariff by the Nigerian Communications Commission (NCC) with effect from December 1, 2016, are underway.

The motion to halt the move was mooted by Deputy Senate Leader Ibn N'Allah who raised a motion on the increase in data tariffs by the telecoms companies over policies of the NCC.

The proposed hike in the cost of internet data which has been kicked against vehemently by Nigerians who describe the move as insensitive has also been thumbed down by majority of Nigerian Senators who in totality condemned the increase of data tariffs by the service providers.

One of the tweets posted by the Senate reads thus; “Senate mandates #CtteeCommunications to carry out through oversight on the process to ensure that Nigerians are carried along in the process”. 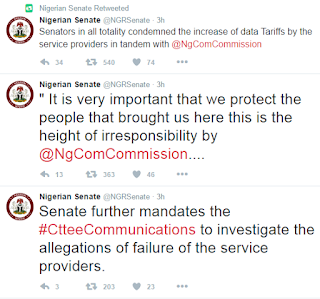 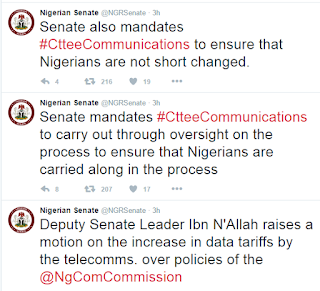