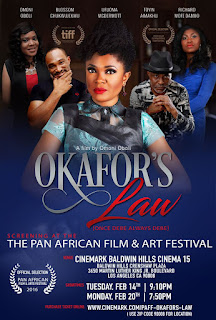 
The screening of the movie will be held at Cinemark Baldwin Hills Cinema 15, Boulevard, Los Angeles on Tuesday, February 14th (9:10pm) and Monday, February 20th (7:50pm).
Nollywood actress and producer, is super elated about the success of her movie which is scheduled to hit the cinema screens in Nigerian on Friday, March 31st. “The rate at which my movie is being selected for international airing is amazing. I am super excited about it all. I thank my team and the cast of the movie for pouring their heart out during the course of producing the movie,” said Omoni.